Mindnet
as reviewed by kalinara via the Pretty, Fizzy Paradise Blog
continued....

I love frame-up episodes. I admit it. There's nothing like seeing the team band together to save one of their own from injustice. :-) It really emphasizes the all-for-one/one-for-all element and it's really the best wish-fulfillment part of being on a team like this. Someone's always got your back!

I'm enjoying that the show has FINALLY figured out what they want to do with Niko. The fainting psychic thing did make a brief return here, but was overpowered by general awesomeness such as outwitting the queen and kicking people in the face.

I guess that the Queen using the Mindnet helmet also explains away the stupidity of bringing the half of the device she doesn't already have straight to her. Which makes me feel a little better about that.

We also learn that the Rangers can lend power to one another via Implants. Well, at least, we know they can feed power to Niko. It remains to be seen if it can work in any other direction.

I spent most of the episode trying to figure out if this episode possibly should have been BEFORE Traash, but the damaging at the end pretty much settles the issue. I suppose Walsh had to explain what the Mindnet did just to remind the audience why we care. It's just a bit odd, because normally they're really good about things like that.

Of course, the biggest part of the episode was the appearance of Ryker Kilbane and the tidbits of information about the Supertroopers.

Before this episode, all we really knew about the Supertroopers came from Shane's comment about genetic engineering (Chained), that the program had been shut down a few years back and DNA was still being smuggled out (Smuggler's Gambit), and that apparently Supertroopers are known for their temper. (One Million Emotions.)

Now we know a bit more. And it's all pretty ominous.

The most ominous part is probably that whole emphasis on the surviving Supertroopers. That's never a good choice of words. At all. Moreover, we learn that certain people on the Board of Leaders are very leery of Supertroopers, Goose included.

This episode does seem to explain a lot of the mixed feelings that Shane appears to have about the whole Supertrooper thing. Especially if, as the end implied, the majority of the surviving Supertroopers have more in common with Kilbane than they do with Goose.

Actually, it looks as though Shane is specifically set AGAINST the other Supertroopers. Kilbane doesn't say "We know you're coming FOR us." He says, "We know you're coming AFTER us." Which is a completely different implication entirely. Especially considering that he wants Kilbane to WARN them. But at the same time he does appear genuinely concerned/worried for them. And even after being set up, he tries to convince Kilbane that they can HELP him.

Whatever happened to the Supertrooper program must have been one heck of a doozy. But it does indicate that for all that Goose insists he's not a Supertrooper anymore, he does still feel a connection.

And we have a few more questions: Are the Supertroopers considered human or not? And what did he mean by being made into a slave? What IS the deal with Gooseman and the Galaxy Rangers? (He certainly doesn't seem at all reluctant or forced to be there...) Hopefully, we'll find these out as the series continues.

As a dark mirror to Goose, Ryker Kilbane is an interesting character. They have the same powers, but they use it differently. As mentioned before, Shane uses his powers unconsciously or automatically. Kilbane, in contrast, flaunts his powers. It's one of the many giveaways that the Shane Gooseman we see at the very beginning of the episode is an impostor.

It's pretty awesome actually that it IS so apparent that the impostor is fake. He might LOOK like Shane Gooseman, but he talks differently (as I mentioned previously, he SOUNDS like a baritone trying to force himself into tenor range), he gets angry differently (Shane growls, he doesn't shout), he even walks differently (Kilbane-as-Shane has more of a swagger) and then there's the GRINNING!

We also get the impression that Goose, at least, spends a fair bit of time in Longshot. Long enough at any rate, that while the doctors and security chief may or may not seem to know him well, (to be fair, they did intend to test him further), the dolphin-minders definitely do.

And I love that they're just randomly all "Oh, look. Your dolphin friends!" Of COURSE Goose would have dolphin friends that just get gratuitously pointed out in this episode!

I love this show.

But anyway, Kilbane's definitely interesting as a contrast. He's loud, crazy, ego-driven and at the same time, incredibly insecure. I suppose that's not really surprising though, because if you consider Kilbane as super-soldier type material, he fails miserably.

Granted, he has POWERS and is clearly physically strong. But he cares only for his own self-interest, doesn't follow orders, and is, to put it bluntly, pretty stupid. And since this is not a show that tends to dumb down its villains, that means something. Where Goose himself is a fairly good indicator of how scary a functioning Supertrooper could be (Powers + intelligence and the capacity for subtlety), Kilbane's like a rabid animal. Dangerous, but not all that scary. At least for now.

I definitely enjoyed the shirtless fighting though. :-) 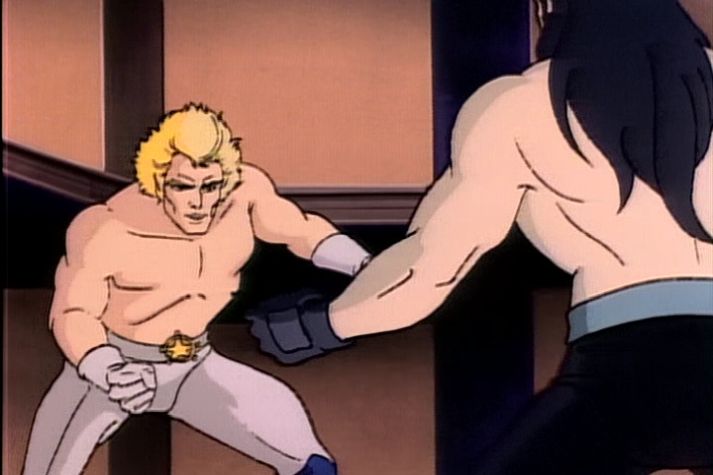